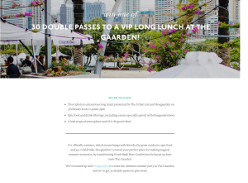 We've teamed up with Hoegaarden to create the ultimate summer party at The Gaarden, and we've got 30 double passes to give away!

FILL OUT THE FORM BELOW FOR YOUR CHANCE TO JOIN US THERE!

2. This Promotion is open to all Australian residents aged 18+. By ticking the opt-in box, each entrant agrees to receive offers and promotions from Hoegaarden (CUB) and the Promoter.

3. Employees (and their immediate family and/or those living in the same household) of the Promoter, Hoegaarden (CUB), and their respective affiliates, subsidiaries, agencies and suppliers associated with this promotion are ineligible to enter. Immediate family means any of the following: spouse, ex-spouse, de-facto spouse, child or step-child (whether natural or by adoption), parent, step-parent, grandparent, step-grandparent, uncle, aunt, niece, nephew, brother, sister, step-brother, step-sister or 1st cousin.

5. To enter, individuals must complete the following steps during the Promotional Period:

6. Incomplete or indecipherable entries will be deemed invalid.

8. Thirty (30) valid entries will be selected for the Major Prize. The Promoter may select additional reserve entries, in case of an invalid entry or ineligible entrant.

9. The winners will be selected at random.

10. The Promoter’s decision is final and no correspondence will be entered into.

The prize will be arranged for the retailer nominated by the winner in their entry form.
The prize will be non-transferrable.
The Urban List will supply the tickets to the winner, however the winner is responsible for redeeming their voucher within the valid redemption period as stated by the retailer.
No substitutes will be provided for the major prize.
Hoegaarden (CUB) and The Urban List are not responsible for any loss, damage or injury suffered or claimed (including, but not limited to, indirect or consequential loss or damage, personal injury or death, and direct or indirect loss or damage) by an entrant in relation to entering or participating in this Promotion or taking or using the prizes offered except where that loss, damage or injury was caused by breach of these Terms by the Promoter or the wilful or negligent acts or omissions of the Promoter. To avoid any doubt, the Promoter shall not be liable for loss caused by technical and mechanical malfunction which is outside the control of the Promoter.

Prize is non-refundable and may not be transferred for cash or any other goods or services, with any unused portions forfeited.

13. The winner will be notified via e-mail, on Tuesday 23rd January 2018. The winner must acknowledge acceptance of and claim their prize by replying to this e-mail with details requested. This must be received by the Promoter no later than 12.00pm AEST on Friday 26th January 2018.

14. Where the prize winner is not able to redeem any part of the Major Prize due to physical inability or incapacity, poor weather or any other circumstances beyond Hoegaarden (CUB) or the Promoter’s reasonable control, then the prize (or part thereof) will be forfeited and will not be redeemable for cash, or other prize, goods or services.

15. If for any reason a winner does not acknowledge accept of and claim their prize by 12.00pm AEST on Friday 26th January 2018, the prize will be forfeited and another winner selected.

16. The Promoter shall have no liability for a winner's failure to receive notices due to winner’s spam, junk email or other security settings or for a winner’s provision of incorrect or otherwise non-functioning contact information.

18. The Promoter and Hoegaarden (CUB) reserve the right, at any time, to verify the validity of entries and entrants (including an entrant’s identity, age and place of residence).

19. The Promoter reserves the right, in its sole discretion, to disqualify any individual who the Promoter has reason to believe has breached any of these Terms and Conditions, tampered with the entry process or engaged in any unlawful or other improper misconduct calculated to jeopardise the fair and proper conduct of the promotion. Errors and omissions may be accepted at the Promoter's discretion. Failure by the Promoter to enforce any of its rights at any stage does not constitute a waiver of those rights.

20. If there is a dispute as to the identity of an entrant, the Promoter and Hoegaarden (CUB) reserve the right, in their sole discretion, to determine the identity of the entrant.

21. If a winner of a prize is under the age of 18 years, the prize will be forfeited by that entrant, and the next best entry will be awarded.

22. Prizes, or any unused portion of a prize, are not transferable or exchangeable and cannot be taken as cash.

23. In the event of war, terrorism, state of emergency or disaster, the Promoter and/or Hoegaarden (CUB) reserve the right to cancel, terminate, modify or suspend the promotion, or suspend or modify a prize.

24. As a condition of entering this promotion, each entrant licenses and grants the Promoter and Hoegaarden (CUB), its affiliates and sub-licensees a non-exclusive, royalty-free, perpetual, worldwide, irrevocable, and sub-licensable right to use, reproduce, modify, adapt, publish and display their entry (which shall include Content) for any purpose, including but not limited to future promotional, marketing or publicity purposes, in any media, without compensation, restriction on use, attribution or liability. Entrants agree not to assert any moral rights in relation to such use and warrant that they have the full authority to grant these rights.

25. As a condition of accepting a prize, each winner must sign any legal documentation in the form required by the Promoter, Hoegaarden (CUB) and/or prize suppliers in their absolute discretion, including but not limited to a legal release and indemnity form.

26. Entrants consent to the Promoter and Hoegaarden (CUB) using their name, likeness, image and/or voice in the event they are a winner (including photograph, film and/or recording of the same) in any media for an unlimited period without remuneration for the purpose of promoting this promotion (including any outcome), and promoting any products manufactured, distributed and/or supplied by the Promoter or Hoegaarden (CUB). Entrants also consent to being contacted by the Promoter and/or Hoegaarden (CUB) to discuss the possibility of further promotional activity on social media pertaining to this promotion (including photograph, film and/or recording of the same)

27. Entrants that have opted in agree to have their email address added to the Promoter’s and Hoegaarden (CUB)‘s email lists.

28. If this promotion is interfered with in any way or is not capable of being conducted as reasonably anticipated due to any reason beyond the reasonable control of the Promoter and/or Hoegaarden (CUB), including but not limited to technical difficulties, unauthorised intervention or fraud, the Promoter reserves the right, in its sole discretion, to the fullest extent permitted by law (a) to disqualify any entrant; or (b) subject to any written directions from a regulatory authority, to modify, suspend, terminate or cancel the promotion, as appropriate.

29. Nothing in these Terms and Conditions limits, excludes or modifies, or purports to limit, exclude or modify the statutory consumer guarantees as provided under the Australian Consumer Law and Fair Trading Act 2012 (Vic), as well as any other implied warranties under the ASIC Act 2001 (Cth) or similar consumer protection laws in the States and Territories of Australia (“Non-Excludable Guarantees”). Except for any liability that cannot by law be excluded, including the Non-Excludable Guarantees, the Promoter (including its respective officers, employees and agents) excludes all liability (including negligence), for any personal injury; or any loss or damage (including loss of opportunity); whether direct, indirect, special or consequential, arising in any way out of the promotion.

30. Except for any liability that cannot by law be excluded, including the Non-Excludable Guarantees, the Promoter and Hoegaarden (CUB) (including its respective officers, employees and agents) is not responsible for and excludes all liability (including negligence), for any personal injury; or any loss or damage (including loss of opportunity); whether direct, indirect, special or consequential, arising in any way out of: (a) any technical difficulties or equipment malfunction (whether or not under the Promoter’s control); (b) any theft, unauthorised access or third party interference; (c) any entry or prize claim that is late, lost, altered, damaged or misdirected (whether or not after their receipt by the Promoter) due to any reason beyond the reasonable control of the Promoter; (d) any variation in prize value to that stated in these Terms and Conditions; (e) any tax liability incurred by a winner or entrant; or (f) taking/use of and/or participation in a prize.

31. The Promoter collects personal information in order to conduct the promotion and may, for this purpose, disclose such information to third parties, including but not limited to agents, contractors, service providers, prize suppliers and, as required, to Australian regulatory authorities. Entry is conditional on providing this information. The Promoter may, for an indefinite period, unless otherwise advised, use this information for promotional, marketing, publicity, research and profiling purposes, including sending electronic messages or telephoning the entrant. Entrants should direct any request to opt out, access, update or correct personal information to the Promoter. The Promoters Privacy Policy is available at https://www.theurbanlist.com/melbourne/privacy

32. All entries become the property of the Promoter.