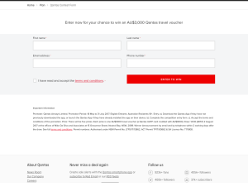 2) The promoter is Qantas Airways Limited (ABN 16 009 661 901) of 10 Bourke Road, Mascot, NSW 2020 (telephone number 131313) (Promoter).
Duration
3) All references to time in this document are a reference to the local time in Sydney, New South Wales, Australia on the date stated. The promotion commences 00.01 AEST on 18 May 2017 and closes at 23.59 AEST on 31 July 2017 (Promotion Period).
Eligibility to enter
4) Entry is open only to Australian residents 18+ (Eligible Entrants), excluding directors, management, employees and their immediate families of the Promoter and its related bodies corporate and registered travel companions of employees of the Promoter and its related bodies corporate.
Entry into the promotion
5) To enter, Eligible Entrants must during the Promotion Period;
a. Download the Qantas App if they have not previously downloaded the app, or launch the Qantas App if they have already installed the app on their device.
b. Complete the competition entry form.

c. Accept the terms and conditions of the promotion.