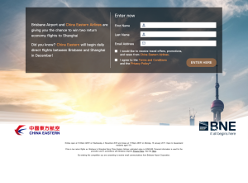 Brisbane Airport
Added: 07-Dec-16
Closes: 16-Jan-17
TERMS AND CONDITIONS
BNE MAGAZINE’S PROMOTION:
“WIN 2 RETURN FLIGHTS TO Shanghai, China”
1. Information on how to enter and the prize form part of these Terms and Conditions. Participation in this promotion is deemed acceptance of these Terms and Conditions.
2. The Promoter is Brisbane Airport Corporation Pty Limited (ABN 54 076 870 650) of 11 The Circuit, Brisbane Airport, Queensland 4008, Australia.
3. Entry is only open to Queensland residents aged 18 years old or over.
4. Employees, contractors, consultants and their immediate families of the Promoter, China Eastern Airlines and agencies associated with this promotion, are ineligible to enter.
5. Entry is conditional on providing personal information. The Promoter collects and deals with personal information in accordance with these Terms and Conditions and its privacy policy available at http://www.bne.com.au/privacy-policy.
6. Incomplete, indecipherable or illegible entries will be deemed invalid.
7. All entries become the property of the Promoter.
Duration of promotion
8. The promotion commences at 10:00am AEST on Wednesday, 2 November 2016 and closes at 11:59pm AEST on Monday, 16 January 2017 (Promotion Period).
How to enter
9. To enter, individuals must, during the Promotion Period, complete the online entry form at http://competitions.bne.com.au (Promotion Page), provide a valid email address and agree to the Terms and Conditions on the Promotion Page.
10. An individual may enter this promotion only once except where that individual qualifies for a Bonus Entry in accordance with clause 11 below, in which case, that individual may have multiple entries.
11. An individual will earn one Bonus Entry into the promotion when they share the promotion on Facebook or by email, in each case using the process on the Promotion Page. Only one Bonus Entry per day can be earned.
Prize details
12. The first valid entry drawn will win 2 x return economy class flights from Brisbane to Shanghai, flying China Eastern Airlines valued at up to AU $3,846 (Prize).
13. The Prize is not transferable and cannot be taken as cash. Any ancillary or further costs associated with prize redemption are not included and must be met by the Prize winner. Any unused balance of the Prize will not be redeemable as cash.
14. Prize is limited to airfares and does not include taxes and other charges.
15. This original winning letter (“Prize Letter”) must be presented when redeeming the Prize. Tickets will be issued upon proper redemption of the Prize.
16. China Eastern Airlines will not take any responsibility for lost Prize Letters and we will not replace Prize Letters if it is lost, stolen, destroyed or for any other reason.
17. Seats are not confirmed and shall be on standby status only.