Win a family holiday to Disneyland 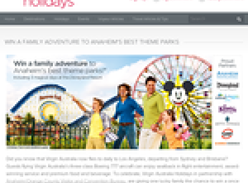 Win a family holiday to Disneyland

Virgin
Added: 31-Mar-15
Closes: 05-Apr-15
To enter the Competition, Entrants must submit a completed Competition entry form:
a. registering their details including (but not limited to) first name, last name, closest airport,
postcode and email address; and
b. subscribing to receive the Virgin Australia Holidays e-newsletter; and
c. answering the question ‘in 25 words or less, tell us how you’d enjoy an Anaheim Adventure with your family, thanks to Virgin Australia.