Win a luxury trip for 2 to Dubai! 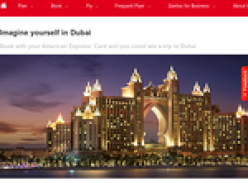 Win a luxury trip for 2 to Dubai!

Entry into the promotion

To enter, Eligible Entrants must, during the Promotion Period;

a. Make a Qantas booking (that is, through qantas.com or telephone 13 13 13, or through a travel agent who confirms the tickets issued are Qantas tickets beginning with ticket number 081)
b. with an eligible American Express Card (that is, an existing account that is current and in good standing and held by a member in Australia);
c. for a Qantas operated flight with a QF flight number either on the Qantas International or Domestic network for travel completed by 31 April 2015 .
d. Complete the entry form at qantas.com/atlantis and enter an eligible booking reference number (PNR), full name, email address and telephone number.

For the purpose of entering this promotion, eligible Qantas bookings cannot be made using Qantas Points.

There will be one prize to be won. The maximum total prize value is AU$10,000.00 based on the recommended retail value and the exchange rate at the time of printing. The Promoter accepts no responsibility for any variation in the value of the prizes.

The prize will include:

a. Return Premium Economy class airfares from the winner's nearest Australian capital city to Dubai in the United Arab Emirates for 2 adults flying Qantas Airways, (flight associated taxes are included); and
b. 4 nights' accommodation in Dubai at Atlantis, the Palm Dubai.