Win a non-speaking background role on 'Modern Family' in Sydney! 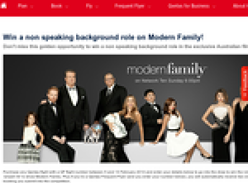 Win a non-speaking background role on 'Modern Family' in Sydney!

To enter, Eligible Entrants must, between 5th February and 14th February 2014;

a. Make a Qantas booking (that is, through qantas.com or telephone 13 13 13, or through a travel agent who confirms the tickets issued are Qantas tickets beginning with ticket number 081). Booking fees apply for bookings made by telephone. Some agents may charge service fees for bookings, which vary;
b. For a Qantas operated flight with a QF flight number either on the Qantas International or Domestic network for travel completed by 31 January 2015.

There is one prize to be won. The maximum total prize value is $AU4,130 based on the recommended retail value of the fares and hotel. The Promoter accepts no responsibility for any variation in the value of the prizes. The date of filming will fall between the 19th February and 2nd March (subject to change). The winner must be available to take the prize between these dates, subject to confirmation of the final filming date.

a. Return Economy class airfares from the winner's nearest Australian Qantas (or Qantas Link) port, on a direct service to Sydney for 2 adults flying Qantas Airways, (flight associated taxes are included); and
b. Maximum of 4 nights accommodation in Sydney in one twin room. The accommodation is hotel accommodation in a 4-star or 5-star property at the discretion of Qantas and will be booked and managed by Qantas; and
c. A non-speaking, walk on role for the prize winner on the set of Modern Family, an episode of which is being filmed in Sydney between 19th February and 2nd March 2014 (subject to change).

The walk-on role may be shot separately from other production activities, and is subject to terms and conditions imposed by the series producer, applicable venues, laws and union/guild agreements. The directors of the show have sole discretion over all elements relating to the walk on role, including shooting dates, the scene selected, visibility of the role, and inclusion in the final edit of the show. The prize winner will receive no compensation regardless of whether the walk-on role actually appears in the episode. Fox reserves the right to substitute the foregoing background role in the episode with a prize of equivalent value, as determined by Fox in its sole discretion, if circumstances so require.

The winner and their companion are solely responsible for any and all in-room charges (e.g., mini-bar, movies) telephone calls, meals, beverages, gratuities, travel upgrades, personal incidentals and any other expenses not specified herein. The winner will be required to provide a valid VISA, Mastercard, AMEX or Diners credit card, debit card, or cash deposit upon hotel check-in and all in-room charges, telephone calls, meals, beverages, hotel upgrades, amenities, personal incidentals, and any other expenses charged to the Winner's hotel room will be charged to the Winner's major valid credit card, debit card, or cash deposit provided. No substitution, assignment, redemption for cash, or transfer of any prize permitted. Hotel accommodation for four nights in Sydney in a twin room is subject to availability, additional restrictions may apply.

Airfares are subject to availability at the time of booking. The winner and their companion(s) must travel and stay together on all prize flights, activity and accommodation respectively. Winner and their companion(s) will not accrue Qantas Points on the prize flights or accommodation. Prize includes applicable taxes and GST. If the winner's closest Qantas serviced airport is Sydney the airfare portion of the prize will be forfeited and no compensation or payment will be given in lieu.

Unless otherwise stated, the Prize does not include travel insurance, ground transportation or any other costs of a personal nature not stated. Compliance with any health or other government requirements is the responsibility of the prize-winner and companion. All travel associated with the prize is subject to Qantas' General Conditions of Carriage.

The prize must be taken as stated and no compensation will be payable if a winner is unable to use the prize as stated. The prize is not exchangeable or redeemable for cash or other goods or services. The prize cannot be transferred to any other person, unless agreed to by the Promoter. There can be no changes made to travel arrangements once tickets are issued.