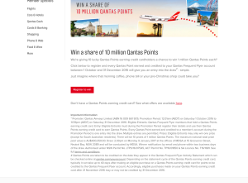 3) All references to time in this document are a reference to the local time in Sydney, New South Wales, Australia on the date stated. The promotion commences at 12.01am on Saturday 1 October 2016 and closes at 11.59pm on Saturday 31 December 2016 (Promotion Period).

4) Entry is open only to Qantas Frequent Flyer members aged 18 years or over with a Qantas Points earning credit card (Eligible Entrants), excluding directors, management, employees of the Promoter and their immediate families and registered travel companions, and its related bodies corporate.

Entry into the promotion

5) To enter, Eligible Entrants must during the Promotion Period:

a) register their details including their Qantas Frequent Flyer number at the specified URL; and

Every Qantas Point earned and credited to a member's account during the Promotion Period will equal one entry into the competition.

7) The Promoter is not responsible for any lost, late or misdirected entries.

10) The time of entry will be deemed to be the time the Qantas Points are credited to the member's Qantas Frequent Flyer account.

11) The Promoter reserves the right, at any time, to verify the validity of entries and Eligible Entrants (including an entrant's identity, age and place of residence) and to disqualify any entrant who tampers with the entry process. Failure by the Promoter to enforce any of its rights at any stage does not constitute a waiver of those rights.

12) The draw will take place at 2.00pm on Monday 9 January 2017 at the offices of MDSA at 15 Grosvenor Street, Neutral Bay, NSW 2089 and will be conducted by MDSA (Drawer). The winners will be determined by an automated random draw of all eligible entries.

13) The result of the draw is final and no correspondence will be entered into.

14) There will be 10 Prizes in total. Each prize consists of 1 million Qantas Points (Prize). The maximum total Prize pool value is $400,350.00 based on the recommended retail value at the time of printing. The Promoter accepts no responsibility for any variation in the value of the Prizes.

17) Each Prize must be taken as stated and no compensation will be payable if a winner is unable to use the Prize as stated. Prizes are not exchangeable or redeemable for cash or other goods or services. A Prize cannot be transferred to any other person, unless agreed to by the Promoter. By accepting the Prize, the winner accepts the conditions of use of that Prize.

Notification of the winner

19) The winners will be notified in writing by email and by telephone within 2 business days of the draw and their names will be published in The Australian newspaper and on qantas.com on Monday 16 January 2017.

Right of the Promoter to redraw

20) The Promoter reserves the right to redraw in the event of an entrant being unable to satisfy these promotion terms and conditions or forfeiting or not claiming a Prize. If a Prize remains unclaimed at 11.00am on Monday 10 April 2017, a second draw will be conducted by the Drawer at 2.00pm on Thursday 20 April 2017 at the same place as the original draw, subject to any written direction given under applicable law. Any winner will be notified in writing by email within 2 business days of the draw and their name will be published in The Australian newspaper and on qantas.com on Thursday 27 April 2017.

21) If any act, omission, event or circumstance occurs which is beyond the reasonable control of the Promoter and which prevents the Promoter from complying with these terms and conditions, the Promoter will not be liable for any failure to perform or delay in performing its obligations. The Promoter reserves the right (subject to any applicable law) to cancel, terminate or modify or suspend this promotion.

22) The Promoter, its related bodies corporate and their respective officers, employees, contractors and agents (Promotion Parties) will not be liable for any losses, damages, expenses, costs or personal injuries arising out of this promotion, the promotion of this promotion or the use of any Prize, including but not limited to any breach of these terms and conditions, contract or tort (including negligence) and any other common law, equitable or statutory remedy (Damages) whatsoever, including but not limited to direct, indirect and consequential Damages, including Damages that cannot reasonably be considered to arise naturally and in the ordinary course of things, even if those Damages were in the contemplation of the Promotion Parties.

23) The exclusion of liability in clause 23 does not apply to limit or exclude liability:

b) to the extent it is not permissible at law to limit or exclude liability in the manner contemplated in that clause (in which case that liability is limited to the maximum extent allowable by law).

24) Entry details remain the property of the Promoter. The name and photograph of the winners may be used for promotional purposes by the Promoter, unless a winner otherwise notifies the Promoter at the time of accepting their Prize. Entrants consent to the Promoter using personal information provided in connection with this promotion for the purposes of facilitating the conduct of the promotion and awarding any Prizes (including to third parties involved in the promotion and any applicable statutory authorities) and to conduct marketing activities. Without limiting the foregoing, entrants' personal information provided in connection with this promotion will be handled in accordance with the Promoter's Privacy Statement, visit to obtain a copy.

25) The Promoter accepts no responsibility for any tax implications that may arise from accepting a Prize. Independent financial advice should be sought.