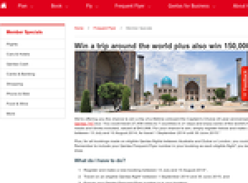 Entry is open only to Qantas Frequent Flyer members aged 18 years or over (Eligible Entrants), excluding directors, management, employees of the Promoter and their immediate families and registered travel companions, and its related bodies corporate.

a) To enter for a chance to win the grand prize of two (2) Economy tickets for the Captain's Choice 'Around the World by Private Qantas 747' 21 day tour commencing on 16 October 2014, Eligible Entrants must during the Promotion Period make a new booking on any eligible Qantas domestic or international flight (that is, a Qantas operated flight with a QF flight number on the ticket) between 12.01am (AEST) Sunday 13 July 2014 and 11.59pm (AEST) Sunday 10 August 2014 for travel between 1 September 2014 and 30 June 2015.
b) To enter for a chance to win the secondary prize of 150,000 Qantas Points, Eligible Entrants must comply with the requirements of clause 5 (a) and must have made a booking on QF1, QF2, QF9 or QF10 between Australia and Dubai or London.
c) During the Promotion Period, all Eligible Entrants must complete the registration form available at qantas.com/winatrip and enter their Qantas Frequent Flyer membership number.

There will be two prizes.

(i) The grand prize is two (2) Economy tickets for two (2) adults for the Captain's Choice 'Around the World by Private Qantas 747' 21 day tour departing from Sydney on 16 October 2014 and returning 5 November 2014. If the winner does not live in Sydney, the prize also Includes (2) Qantas Airways return Economy flights from the Winner's nearest Australian capital city to Sydney. If the winner's nearest capital city is Sydney, flights will not be included as part of the Prize and no compensation will be given or paid in lieu. While the winner's requested domestic connecting flight times (where applicable) will try to be accommodated, are subject to availability and any ancillary accommodation is at the expense of the winner.
(ii) The secondary prize is 150,000 Qantas Points.