Win a trip for 2 to New Zealand to watch the Cricket! 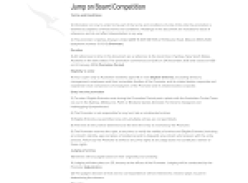 Win a trip for 2 to New Zealand to watch the Cricket!

All references to time in this document are a reference to the local time in Sydney, New South Wales, Australia on the date stated. The promotion commences at 12:00 on 24 December 2015 and closes at 11:59 on 24 January 2016 (Promotion Period).

To enter, Eligible Entrants must during the Promotion Period post a photo with the Australian Cricket Team cut-out in the Sydney, Melbourne, Perth or Brisbane Qantas Domestic Terminal to Instagram and hashtagging #jumponboard.

There will be two (2) prizes. The maximum total prize pool value is AU$2,500, based on the recommended retail value at the time of printing. The Promoter accepts no responsibility for any variation in the value of the prizes.

Flights and accommodation will not form any part of the prize for winners who are residents of, or live in reasonably close proximity to Auckland.