Win a trip to the Gold Coast! 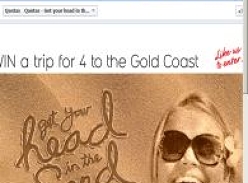 Win a trip to the Gold Coast!

a) Visit the Qantas head in the sand Facebook application by going to Qantas' Facebook page and going to the app (in order to access the app, Eligible Entrants must first like the Qantas Facebook page);
b) Complete the application on the page, by submitting a cropped photo of themselves from Facebook and answering in 25 words or less "why would you like to go to the Gold Coast on your next holiday?"

There will be 11 prizes. The maximum total prize pool value is $20,496 based on the recommended retail value at the time of printing. The Promoter accepts no responsibility for any variation in the value of the prizes.