Win a year off your mortgage! 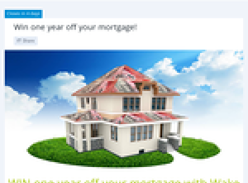 Win a year off your mortgage!

Network TEN
Added: 26-Jan-14
Closes: 29-Jan-14
Entry is open to all residents of Australia who are 18 years of age or over. However, employees and their immediate families of Network TEN, Salmat Digital Pty Limited, NAB and their associated agencies and companies are not eligible to enter.

The competition will be advertised on, but not limited to, www.tenplay.com.au/wakeup

This competition will have two phases and is completely a game of skill where chance
plays no part in determining the winner.

Phase 1: To enter, participants must log onto www.tenplay.com.au and register their details including (but not limited to) name, address, phone number and e-mail address. They must also provide a caption in 10 words or less to a photo which appeared on Wake Up that same day. Entries for phase 1 must be received between Monday 27th January 2014 06:30 (AEDT) and Wednesday 29th January 2014 11:00 (AEDT). A new photo will be uploaded on the website at 06:30 (AEDT) each day to match the photo shown on Wake Up. Participants can make multiple entries.

Phase 2: Two entrants from phase two will be selected by a panel of judges from 12:00 on 29th January 2014 and deemed the finalists for phase two. The finalists will be the Entrants who, in the sole opinion of the judges, has submitted the most creative and original caption in response to the photo in Phase 1. The finalists will compete against each other to have the most guests in their home at 08:00 (AEDT) on Friday 31st January 2014 as counted by a Network Ten reporter. The count does not include Network Ten employees and contractors.

One (1) major prize winner will win either: