Win groceries for a year! 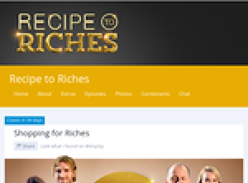 Win groceries for a year!

Entry is open to all Australian residents who are 18 years or older at the time of entry.
Directors, management, employees and their immediate families of Network Ten Pty Limited (“TEN” or “Promoter”) and Mercury Mobility Pty Ltd and their associated agencies and companies are not eligible to enter. Immediate family means any of the following: spouse, ex-spouse, de-facto spouse, child or step-child (whether by natural or by adoption), parent, step-parent, grandparent, step-grandparent, uncle, aunt, niece,
nephew, brother, sister, step-brother, step-sister or first cousin.