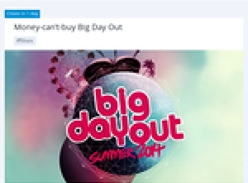 There is one major prize which includes:

The maxiummaximum prize pool for all components is valued at a maximum of $4,197.48 (including GST).